The PON, is a concept in its infancy.  If they can ever get the Genie out of the bottle, and get it to work as envisioned (in the network core). . . PON promises to be the most revolutionary idea since the development of car engines  that run on hydrogen and water.

With PONs, one access line can be shared among multiple buildings--and it can be done at a minimal cost. That's because PONs use low-cost components that don't require a lot of care and upkeep. As a result, PONs cost a fraction of what it takes to run new fiber or rework existing Sonet (synchronous optical network) rings. 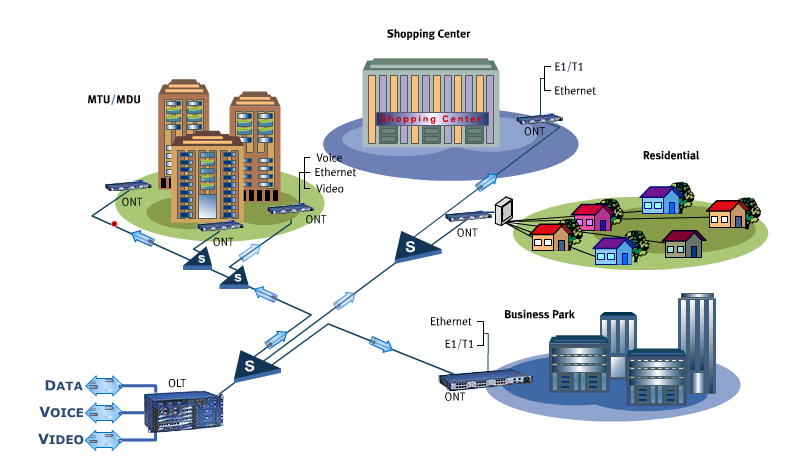 Currently, the most promising application for PONs is as an optical feeder for telcos, cable TV companies and wireless providers. PONs complement emerging broadband access technologies such as xDSL (copper), HFC (coax) and LMDS (wireless), rather than competing against them, by allowing for shorter access drops and higher bandwidth. Because it provides a low cost, high bandwidth, fault-tolerant solution for carriers interested in delivering lucrative revenue generating broadband services, PON is the best solution for the next generation broadband local loop.

CO to User - PONs allow offer multiple data paths by bundling together multiple light wavelengths (up to 32 at present) so they can be carried over a single access line from the carrier's central office (CO) to a manhole or controlled environmental vault close to a cluster of customer sites. At that point, the wavelengths are broken out and each one is steered into a different short length of fiber to an individual site.

User to CO - a different scheme is used for collecting traffic traveling in the opposite direction - from user sites to the CO. In this case, each site is given a specific time slot to transmit, using a polling scheme similar to the one used in old IBM networks.

As promising as a purely optical PON is (see The PON Dream) . . .  in the actual telecom environment, PON's are used for the last-mile only. There are several primary components of a last-mile PON - the OLT, the fiber and splitters, and the ONT:

OLT (Optical Line Terminal) - located at the CO, the OLT interfaces with the metropolitan network. It must be high power because it sends optical signals out, which are immediately broken into several streams.  The main functionality of the OLT is to adapt the incoming traffic (Voice and Data) from the metropolitan rings into the PON transport layer.

ONT (Optical Network Termination) and ONU (Optical Network Unit) - ONT and ONU are basically the same device - however, the ONT is located at the customer premise, and the ONU isd located outside the home.  These devices are the interface between the customer equipment and the PON.  They talk to the OLT via the PON.

PON Splitters - With a single PON splitter, 32 subscribers can be served with two-way ATM. This way, it is not necessary to include a lot of add/ drop multiplexers and install the dreaded OSP cabinet. The PON splitters can be arranged in star, ring, or tree configurations to increase reliability.

Although PON has a long way to go, there have been some very exciting advances made in the field.  A PON system typically consists of:

1. an optical terminal at the customer site that terminates the optical signal and delivers voice and data

2. an optical switch or other device that sits at the central office to send the PON protocol to the terminal at the customer premises

3. the passive couplers and splitters that actually sit on the fiber loop

The PON equipment in the loop is placed at a fiber junction to act as a T-connector would on a garden hose, splitting two fibers into eight fibers, for example, to enable multiple customers to share fibers.  PON networks can be designed using three different topologies:

Those PON devices on the loop, which can be as small as a pen, typically cost only a couple hundred dollars vs. the hundred of thousand dollars it would cost to install a SONET add/drop multiplexer and the environmentally-controlled housing and power that would have to go with it. And because PON couplers and splitters are passive, meaning they don't require power, the carrier doesn't have to do as much ongoing maintenance of the equipment because there's no need for backup power or batteries in the outside plant.

PON lets carriers go into new markets and share fibers among residential and small business customers like gas stations, strip malls and smaller establishments with automatic teller machines fed by 56kbps lines. It can also enable carriers to reach buildings that are just out of reach of fiber in a metropolitan network or even in-building networks that want to bring fiber to additional customers.

APON (ATM PON) - ATM-based PONs (APONs) work just like standard ATM networks. Customers establish Virtual Circuits (VCs) across the APON to a destination, such as another office or the ISP's premises. These VCs are bundled into what's known as Virtual Paths (VPaths) for faster switching in the carrier's network.

The speed of operation depends on whether the APON is symmetrical or asymmetrical. Symmetrical APONs operate at OC-3 speeds (155.52Mbit/sec). For Asymmetrical APONs, the downstream transmission from the OLT in the CO to the customer premises ranges from 155.52 to 622.08Mbit/sec. Upstream transmission from the customer premises to the CO occurs at 155.52Mbit/sec. All network topologies support both configurations, unless the fiber extends to the home, in which case asymmetrical operation isn't supported.

BPON (Broadband PON) - BPON is an ITU-based standard, based on APON, but uses WDM.  It defines how ATM data is encapsulated into frames in groups of 54 cells.  AN important group called FSAN (Full Services Access Networks) work with one goal - to find the best way to achieve early and cost-effective deployment of broadband optical access systems.  The group is composed of Nippon Telegraph and Telephone, BellSouth, France Telecom, British Telecommunications plc, and SBC.  They have developed a set of common technical specifications (CTS) for a B-PON system based on ITU-T Recommendations G.983.1, G.983.2 and G.983.3.

EPON (Ethernet PON) - a standard for Ethernet Passive Optical Networks (EPON) is being developed in the Institute of Electrical and Electronics Engineers (IEEE) 802.3ah Ethernet in the First Mile (EFM) Task Force. Ethernet PONs are point-to-multipoint fiber optic networks suitable for Fiber to the Home (FTTH) and Fiber to the Building (FTTB) applications.  EPON is the newest member of the PON family and is described in detail in the EPON section.

The key difference between Ethernet and ATM PONs is that in Ethernet PONs data is transmitted in variable-length packets of up to 1,518 bytes according to the IEEE 802.3 protocol for Ethernet, whereas in ATM PONs data is transmitted in fixed-length 53 byte cells (with 48 byte payload and 5 byte overhead).  The Internet protocol calls for data to be segmented into variable-length packets of up to 65,535 bytes. For an ATM PON to carry IP traffic the packets must be broken into 48 byte segments with a 5-byte header attached to each one. This process is time consuming and complicated and adds additional cost to the OLT and ONUs. Moreover, 5 bytes of bandwidth are wasted for every 48-byte segment creating an onerous overhead that is commonly referred to as the ATM cell tax. By contrast, Ethernet was tailor made for carrying IP traffic and dramatically reduces the overhead relative to ATM.